It’s becoming more widely known that women are not alone in suffering from osteopenia. Men are also at risk
for this age-related disease. A recent report highlights two ways middle-aged men can defend against bone loss.

The report reviewed data from 38 active men (average age 44) who completed a resistance training protocol twice per week or a jump training workout three times per week for 12 months.
NEW DADS ON POU
Subjects were given calcium and vitamin D supplements throughout the study. To determine any changes in bone mineral density (whole body, lumbar spine and hip), researchers tested the men at baseline, after 6 months
of training and at the end of the study. Subjects provided ratings of perceived pain and fatigue.

Results were promising: Both programs produced significant increases in
whole-body and lumbar-spine BMD by the 6-month mark. Improvements in hip BMD showed up only after 12 months of resistance training. Noting that pain and fatigue ratings remained low among all subjects throughout the study, the researchers concluded that these protocols could be safely included in training programs for this population. 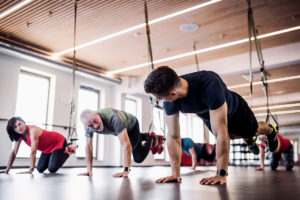